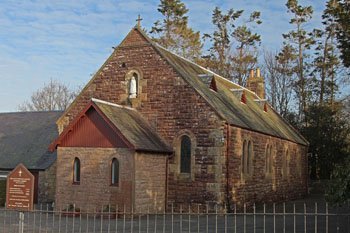 The Church of Our Lady of Perpetual Succour in Auchterarder

Auchterarder and district have a rich history of Christianity.  Celtic and Roman missionaries preached throughout the area and have many churches  still dedicated to saints of that time, e.g. St. Fillan, a 6th century missionary from Ireland. The Episcopal Church is dedicated to St. Kessog,  another Celtic saint, while Dunblane is called after St Blane.   In the 12th century,  Gilbert, Earl of Strathearn, founded an Augustinian community , Inchaffray Abbey,  near Madderty.    In the town  of Auchterarder there was a church dedicated to Our Lady  on the site of the post-reformation parish church   The of religious  welfare of the community   of St MacKessog , Hunter Street, became the responsibility of this Augustinian community , as did the  neighbouring communities in places   like Aberuthven and Dunning.

Before the  Reformation,  there was only the Catholic Church  in Scotland –the main missionaries being St.  Ninian in the  4th century and St Columba, with his monastery on the Island of Iona, in the 7th century.   In the  Middle Ages St Margaret, a Saxon princess who married  Malcolm, King of the Scots, was  very religious and she  and her family brought the Church in Scotland  to be in line with  the religious  developments  on the continent.   The ancient see of Dunkeld continued to exist  and it became a suffragan of St Andrews in 1472 and then of Glasgow in 1492. Robert Crichton was the last pre-reformation Bishop of the diocese from 1550 and indeed the last  in  Scotland .  He was deprived  of his see in 1571 but was restored to it in 1584.  With his  death in 1585 the see of Dunkeld remained vacant  until its  restoration  by Pope Leo X111 in 1878.  A window in the present Church  of Our Lady of Perpetual Succour  commemorates  this restoration and his postoic letter is called   “ Ex supremo apice “ , 4th  March, 1878After the Reformation,   there is very little mention of a Catholic presence in the area until the beginning of the  19th century when Irish emigrants began to come to Scotland as the industrial revolution  got under way in Britain and the Irish famine struck in the  middle of that century.

The Scottish hierarchy  was restored in 1878—later than the  English hierarchy, which was restored in 1850.  By 1868 there were sufficient numbers of Catholics in Auchterarder  for a room to  be  rented for the celebration of Mass.  The priest from Crieff  would come every second Sunday to offer Mass and attend to the  Sunday school for  children.

In 1875 Fr. Andrew Barret, based in  Crieff, acquired a site for the building of a church in Auchterarder and began raising the necessary funds.  Helped by Irish workers on the  railways, the new church was opened in November , 1879, by Bishop George Rigg, the first bishop of the Diocese  of  Dunkeld  after the restoration of the hierarchy in 1878. The church continued to be served   by the  priest in Crieff .  During the years of the second world war the church was used as a billet for Polish soldiers,  leaving the congregation  without a place of worship..  The Parish Church ( the Barony )  kindly gave  the use of their  hall for the celebration of Mass. For a period  during   the  war the present Coop  building was also used for Mass.  In 1945 the church was restored to the parish and was refurbished by parishioners.   Consequently, the church was restored to full use

Later, in 1956,  funding was provided by J.J. Calder of the brewing family for the building of the  parish house  for a resident priest,   and a priest continued to reside there  until 1994, when  the  parish was served by the  priest in Dunblane, which continues to be the case up to the present.

The information in this  article is based on a  booklet composed by the  late Mrs Margaret Butterly of Castleton Road, Auchterarder.